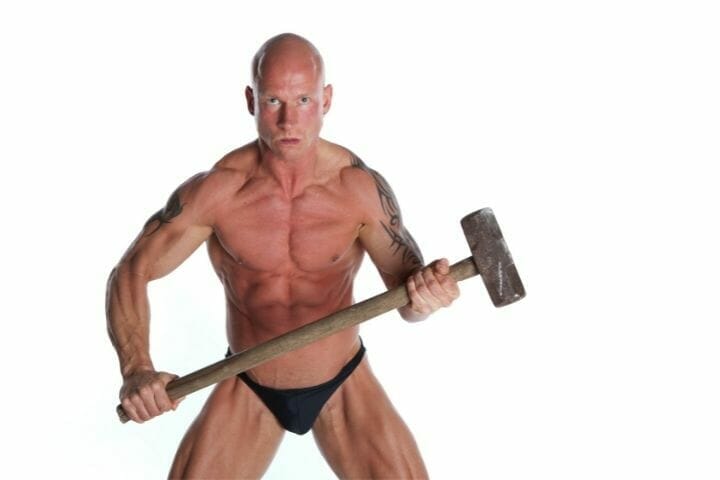 Can your creatine supplements activate your inner rage and aggression? Can creatine make you angry? Does it impact your brain? Let us look at these questions more closely.

Some people believe that regularly taking creatine supplements not only activates the body’s energy cells but also causes you to rage more often.

So, can creatine make you angry? There’s no clear answer on this one, folks. Everyone doesn’t get aggressive after taking creatine. Some people do report problems of aggressive behavior after using creatine supplements.

There are a few reasons why this might be happening: people are not taking enough water after taking creatine, creatine might be causing an increase in testosterone level and others.

If you have a mental health disorder and you are taking creatine, you might start observing some signs of aggression and anger. It’s best to consult a doctor to check whether creatine is safe for you.

Let’s go a bit deeper and investigate this claim.

How Does Creatine Work In My Body?

Unfortunately, your body does not produce enough creatine to help you cope with high-intensity exercise. So if you are looking to build up muscle mass or want to beef up for a bodybuilding competition, you need external supplementation.

Creatine supplements are helpful for weight lifting and bodybuilding. It promotes muscle mass and increases strength and stamina during your workout.

Does Creatine Impact the Brain?

Yes, in many ways.

Research says that if a human takes 20 grams of creatine monohydrate for four weeks, creatine is significantly increased in the brain, especially in the thalamus, cerebellum, white matter, and gray matter. But the entry of creatine into your brain is not as rapid as uptake into your skeletal muscle because of astrocytic feet.

Creatine phosphate is the energized form of creatine and helps increase the energy consumption of your brain. The patients with creatine deficiency in the brain show a low intelligence quotient (IQ).

Dopamine is a neurotransmitter that allows a feeling of pleasure, motivation, and satisfaction. You feel good about achieving something in your life; it is just because of the high dopamine in your brain.

Does Creatine Make You Aggressive?

Research supports a relationship between creatine and aggressive behavior.

In one survey, the researchers tested a relation between creatine kinase and aggressive behavior in 195 male adults admitted to forensic hospitals. It was found that the males who had high creatine kinase levels were violent or aggressive.

Another study was done related to the effectiveness of creatine in effective resistance training. The researcher found that two adults reported feeling aggressive and nervous after taking 25grams of creatine per day for one week.

Researchers were also done on supplementing creatine to animals. The research concluded an increase in depression in male rats when supplemented with 4 percent creatine for almost five weeks.

There is a possibility that taking creatine for a long time can alter the creatine kinase activity, which can adversely affect your emotions and may make you feel aggressive.

What Are Possible Reasons For Getting Aggressive After Taking Creatine Supplements?

Testosterone is the primary sex hormone in males. The hormone plays a vital role in developing male reproductive tissues like the testes and prostate and promoting sexual characteristics in your body, like the growth of muscles and body hair in males.

When a male adult takes creatine supplements daily, it increases the testosterone levels in the body, which can lead to aggressive behavior, or you can get angry for small reasons or silly things.

For instance, a study published in the International Journal Of Sports Nutrition And Exercise Metabolism says that thirty-three males were randomly assigned to placebo, creatine, or creatine plus beta-alanine group.

The exact method for how this works needs more research, but creatine indirectly increases the testosterone levels in male adults, which can have side effects like aggressive behavior and others.

After creatine consumption, the serum T levels did not change in those ten players. But the dihydrotestosterone (DHT) levels were increased by 56 percent in 7 days of creatine loading and remained 40 percent above baseline after 14 days of maintenance doses of creatine supplements.

The increase in the ratio of DHT and testosterone can lead to aggressive behavior in some players.

Creatine pulls most of the water in your body towards the muscle cells.

Consequently, your muscle cells may leave less water in different parts of the body. So it can make you feel dehydrated and exhausted after working in your gym for a short time.

Dehydration or lack of water dramatically affects your brain. It reduces the blood flow and delivery of oxygen to your brain cells. It may make you feel faint or have a slight headache, leading to anxiety, depression, and aggressive behavior.

So I will advise you to drink plenty of water after taking creatine supplements.

#3. Taking Other Supplements Along With Creatine

Some individuals take pre-workout powder and creatine supplements to give a sudden boost of energy while going for work out. Additionally, prework supplements help a gym-goer stay motivated while working out.

A study was done on the effects of caffeine on mood factors like anger in 144 individuals. It was found that the non-smokers who consumed a lot of caffeine experienced poorer moods than others.

Certain ingredients in your creative supplements have chances of changing your mood, like making you aggressive and others.

Are you taking steroids along with creatine supplements? If yes, you have mood swings like you may get aggressive or get angry for silly reasons.

Creatine dramatically affects the production of serotonin in your brain. Serotonin is a vital compound produced in your brain but primarily found in blood platelets, intestinal tract, and central nervous system. Serotonin helps regulate your mood, sleep, memory, and learning.

If you take creatine monohydrate powder more than the recommended dosage daily, there is an increase in creatine levels in your brain.

But increased levels of creatine have some potential side effects. It decreases the serotonin production in your brain, changing your mood. You may have side effects like weight gain, reduced insulin secretion, depression, aggression, or anger because of silly reasons.

It will be best if you take one week per month off from taking creatine supplements so that your body will adjust appropriately. If you can’t do this, then better limit the creatine intake to 3-5 grams per day.

#7. Reaction To Your Performance

You generate a lot of energy after consuming creatine supplements, leading to many emotions in your body. For instance, you may become happy if you achieve the set goal in the workout. But you may become frustrated or angry when you cannot achieve your set goals and targets in the gym or any cardio exercises like swimming, running, and others.

Answers to Some Common Queries

#1. Does creatine affect your mood?

Creatine enhances the energy in the brain. It improves mood in treatment-resistant patients.
However, some studies say that taking creatine supplements can adversely affect emotional regulation for an extended period. It may make you aggressive or angry.

#2. What are the negative effects of creatine?

#4. Who should not take creatine?

If an individual has kidney or liver disease, he should not take creatine. Pregnant women or children below 18 years of age should not take creatine supplements.
If you have any mental disorders and are interested in taking creatine supplements, then it’s best to consult a doctor before use.
Researchers have found that some psychiatric conditions disrupt the ability of the body to transport creatine to the brain. Creatine can adversely affect bipolar patients and can cause more mania.

#5. What happens when I stop taking creatine?

Creatine monohydrate is the supplement used by maximum athletes to increase exercise performance and promote muscle growth. Your vital organs like the liver and kidney also synthesize creatine.
When you start taking creatine monohydrate, the total creatine stored in muscles increases, but suppose you stop taking creatine supplements suddenly.
In that case, the creatine levels in your skeletal muscles drop, which can cause many side effects in your body like fatigue, muscle weakness, weight loss, and natural production of creatine in your body.
However, no evidence suggests that creatine supplements cause permanent damage to organs like kidneys, liver, and pancreas, which naturally synthesize creatine in your body.

Athletes and gym-goers love creatine as a way to increase muscle mass and strength during high-intensity exercises. However, it does not mean that creatine supplements are 100 percent beneficial for every athlete and bodybuilder.

There are some individuals who experience side effects after taking creatine supplements, like becoming aggressive or angry for silly reasons.

I will suggest such people limit creatine supplements and take plenty of water after taking creatine. Additionally, don’t take any prework powder and creatine with a high caffeine intake.

If you are taking medicines for some illness, consult your doctor about creatine supplements before use. These helpful tips will reduce your anger and aggressive behavior.

Thank you for reading our article, and we hope you were able to get all the information that you needed – if we missed anything, please put it in the comments section so that we can add answers to your queries within the article itself.