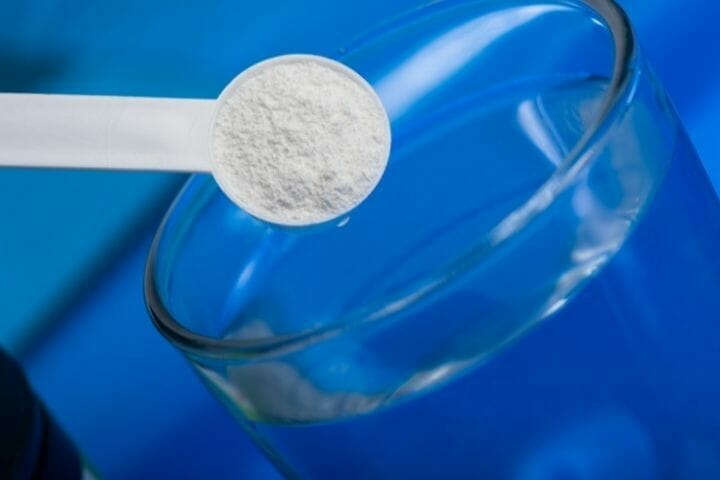 Creatine usually sells as a powder that can be mixed with many drinks and even foods. Can you mix Creatine with Gatorade? Does it cause any side effects or benefits? Let us see in the article below.

In a supplement industry characterized by over-hyped, under-performing products that provide only marginal advantages at best, there are still few muscle-building compounds that are genuinely worth the money. One of these is Creatine.

According to several research studies, Creatine is a safe and effective supplement for boosting muscle growth, strength, and performance. It’s the most thoroughly studied sports supplement in history.

Now the question is: How to Include it in your diet? Well, there are various ways to include Creatine in your diet by using various consumption methods.

Creatine is an important supplement for those who want to build muscle and improve strength, and today we’ll take a look at one of the choices, “Gatorade” for consuming Creatine.

Gatorade is marketed as an aid to physical activity. It includes electrolytes that aid in rehydration, but it also has high sugar content.

The Gators football team at the University of Florida devised the drink in 1965 to improve their performance. It was the first time that Florida won the Orange Bowl in a long time.

In the last three decades, people’s use of sugary beverages has grown dramatically, according to Healthy Eating Research (2012). Sugary sports beverages, such as Gatorade, have been linked to several health problems:

That being said, this does not indicate that Gatorade is immediately hazardous for your health. Gatorade and other sports drinks may be consumed in modest doses without causing any harm.

Should you Mix Creatine With Gatorade?

Creatine With Gatorade is only beneficial to athletes who work out for more than an hour at a time. Electrolytes (minerals like potassium and sodium) are important to your body since they affect how your body functions.

When a person works out a lot, they lose more than just water; they also lose electrolytes. Rehydrating during strenuous exercise is made easier by the electrolytes in Gatorade. Electrolytes help regulate several important processes in the body, including heartbeats.

The number of published studies on sports drinks is well over 300, according to SugarScience at the University of California, Berkeley. Gatorade generously contributes to the research grants of a number of these studies. Critics see this as a conflict of interest when these groups sponsor research on their goods. According to an impartial analysis of research conducted in 2007, studies with corporate financing were substantially more likely to have positive outcomes than trials with no industry backing.

University of California, Berkley researchers have found that most researchers base their findings on the performance of professional athletes. Therefore, it might be prudent to say that serious athletes who compete or exercise for more than an hour may find that Gatorade provides advantages that water does not.

On the other hand, Gatorade and other sports drinks are generally not recommended for people exercising or competing for less than an hour at a time because of the high sugar content that we mentioned earlier.

Most serious athletes and those engaged in lengthy, rigorous exercises can tolerate it when it comes to additional sugar. People who exercise less often or for shorter periods have a higher risk of developing health problems due to eating too much sugar.

Central Washington University compared the calorie content of Gatorade and other sports drinks:

The University of California, Berkeley’s 2014 report indicates that children’s increased use of sugary beverages, especially energy drinks, may be a significant factor in adult obesity. Chronic diseases such as type 2 diabetes and heart disease have also been linked to this.

According to the study’s authors, sports drinks may be touting health advantages that aren’t yet validated by science on their labels and in advertising. Sugary beverages are unnecessary for the majority of individuals, including children and teenagers. These calories, in fact, maybe take the place of more healthful sources of calories.

People should also take into account other elements, such as calories. Artificial sweeteners are used in low-calorie Gatorade variants, and some studies suggest that these sweeteners may contribute to weight gain over time.

According to research published in 2010, Artificial sweeteners may lead to weight gain if eaten on a regular basis. Food dyes in Gatorade and other sports drinks should be taken into account as the last point, particularly by people who are allergic or sensitive to them. According to some studies, artificial colors have been linked to health problems, including hyperactivity and cancer.

Some More Questions About Creatine and Gatorade Answered

Is it possible to include Creatine in sports drinks?

In order to make your Creatine more palatable, you may mix it into a variety of healthy beverages, including juice, protein shakes, and smoothies.

Creatine can also be taken orally. This flavorless powder is often used as a supplement to help people gain muscle growth and improve their athletic performance.

What is the most effective way to combine Creatine and other supplements?

It is standard practice to sell powdered forms of creatine supplements at health food stores. It’s simple to dissolve this powder in tea or warm water rather than cold drinks or soda.

Is there anything that Creatine should not be taken with?

Consuming alcoholic beverages or coffee while taking Creatine may result in dehydration. In the event that you have a liver or kidney condition, have a word with your physician before you consume Creatine. You may first want to try Creatine in smaller amounts to see if it affects your body negatively.

Is it possible to combine Creatine with electrolytes?

Electrolytes may assist in increasing the intake of Creatine, which may help to increase physical strength and power. In a study published in the Journal of the International Society of Sports Nutrition, researchers discovered that cyclists’ repeat sprint performance might be increased by taking these compounds together.

What do 5 grams of Creatine equate to in terms of weight?

It is possible that Creatine With Gatorade might be a beneficial supplement to water for athletes who engage in a lot of physical activity. Gatorade can help to replenish electrolytes, while Creatine will help in muscle building. Lack of electrolytes after a heavy exercise schedule or a sauna that causes dehydration can lead to vomiting or diarrhea.

Some health conditions, such as weight gain and type 2 diabetes, may be exacerbated by Creatine With Gatorade. The drinks’ high sugar and food dye content are harmful substances to watch out for.

Sports drinks like Gatorade and others aren’t always better for you than non-sports drinks because of their composition. Regular use of Gatorade may cause or contribute to weight gain and other health issues.

All in all, if you are into intense workouts, Gatorade and Creatine might be a healthy combo, but for all others, it’s not such a great option. Do share this article with others who might be looking for this information!