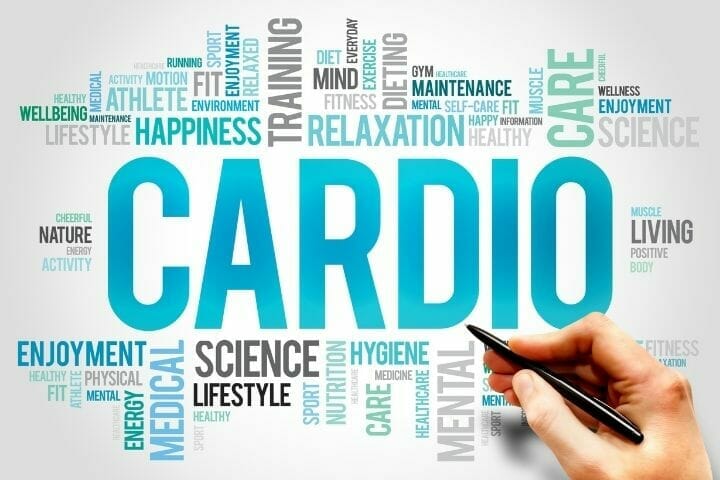 I know creatine is great for HIIT but, should I take creatine on cardio days? Yes, you should. Below we will explain why and how creatine is good for both cardio and HIIT.

Creatine is an organic compound that is produced by your liver and kidneys. You can also find creatine naturally in red meat and fish. However, the amount of creatine is not sufficient to produce energy during strenuous exercises.

Your creatine supply gets exhausted and this is where creatine supplements help to enhance energy and muscular growth. Creatine is well known in the athletic and bodybuilding community for its energy burst that helps with HIIT and other intense workouts.

You will find different types of creatine supplements on the market like creatine monohydrate, and creatine hydrochloride. Creatine monohydrate is usually considered the best. However, few people know that Creatine has benefits for cardio exercises as well! So if you are wondering “should I take Creatine on cardio days?”, let us give you the facts.

Does Creatine Help on Cardio Days?

Yes, it does. Creatine will improve your performance and increase the amount of time that you can do your cardiovascular exercises.

Creatine has many known benefits for weight training and HIIT, but not much is known about its benefits for Cardio. For example, One study has found a 3.7 percent improvement in cycling power after taking creatine constantly for four days.

Several studies have even found that there was an increase in the performance of running after taking creatine. So yes, do take creatine while doing cardiovascular exercises like running, jogging, cycling, swimming, etc.

What Benefits Will I Get By Taking Creatine Before Cardio?

Creatine supplements help reduce muscle inflammation during and after cardio exercises. Research was conducted in 2004 to examine the effects of creatine on runners before a 30 km race. In the study, 18 male athletes were given 20 grams of creatine supplements and 60 grams of maltodextrin for five days. Another control group of athletes was given only maltodextrin for five days.

The third group of runners took a placebo as well as caffeine. All three groups took 2.7mg of caffeine per pound of their body weight.

One of the most significant benefits of taking creatine during cardio exercises is its benefit towards increasing muscle strength. Consequently, you will be able to do more reps in your workout routine. According to a 2007 study, when combined with whey protein, creatine enhances greater strength and muscle growth during cardio exercises.

If you take creatine during your cardio workout, it will increase your cardiovascular efficiency. A study in 2004 published in the Journal of science and medicine in sport aimed to determine whether creatine supplements affect the cardiovascular function and their effect on aerobic power.

Eighteen males were considered for echo-cardio cardiographic assessment of the heart. One group was given 20 grams of creatine supplements for seven days and 10 grams for 21 days. The other groups have ingested a placebo for the same period.

The males who consumed creatine supplements had lower Vo2 max, which means more oxygen in their bodies during cardio exercises.

Additionally, the male who took creatine supplements consistently for four weeks reported that their heart rate decreased by 3.7 percent, which indicates an increase in cardiovascular efficiency. There was no change in blood pressure in either of the groups.

The ingestion of creatine improved submaximal cycling efficiency. The results of increased efficiency are due to an increase in muscle phosphocreatine.

Another 2016 study reported that swimmers who took creatine supplements for six days had lower heart rate and blood lactate levels than athletes who took a placebo.

A study done in 2004 on the effects of creatine supplementation on cardiovascular, thermoregulatory, and metabolic responses on the participants who perform exercises in the heat for a prolonged time.

The males who took creatine supplements had increased intracellular water and decreased thermoregulatory and cardiovascular responses. This means that they were able to process heat more efficiently

Answers to More Questions About Cardio and Creatine

#1. Is it is Ok to do cardio while taking creatine?

Yes, it is perfectly fine to take creatine before doing cardio exercises.
Many studies have reported that taking creatine consistently increases muscle growth and improves the health of your heart.

#2. Do I need to take creatine on cardio days?

Yes, you can use creatine on cardio days. It will improve your performance and reduce muscle soreness and inflammation during and after exercises.

#3. Should I take before or after cardio?

It’s best to take creatine before doing cardio exercises to be appropriately utilized by your body’s muscle cells. Remember, creatine stays in your bloodstream for one and a half hours.
For instance, you can take creatine supplements when you wake up at 7 am to become effective at 8 am. You can start your cardio exercises at 8 to 9 am. In that time, creatine is available in your system, and you will feel energetic and motivated to do more work out.

#4. Should I take creatine on my off days?

However, there are some studies in which you will find that there was no improvement in endurance performance after taking 20 grams of creatine citrate for five days. It may be because of gastrointestinal discomfort during workouts or an increase in weight gain.

We hope this article was able to convince you about what we set out to prove – that creatine is as effective for cardio as it is for HIIT and weightlifting etc. If you have any queries or doubts about what we have stated, feel free to comment and we will respond with our answer.

Do share the article with others who want to know more about the benefits of this wonderful supplement!